There are some people in this world who stick to their passion exceptionally well. No matter what. They don't let money, other people, their environment, or any sort of distraction lead them astray from what they know they were meant to do in this life. Local Santa Cruz artist, shredder, and friend of the brand, Jeremiah Kille, is one of those people.He started riding bikes around Colfax, C.A. when he was a kid, and his drive and passion have led him to create the colorful large-scale oil paintings that he's now known for. Those who've seen his work know how beautifully he blends ominous settings with sharp geometrics. How his pieces fuse together realistic objects—like elephants, matadors, and skulls—with dreamy abstract ones all in the same Daliesque space. 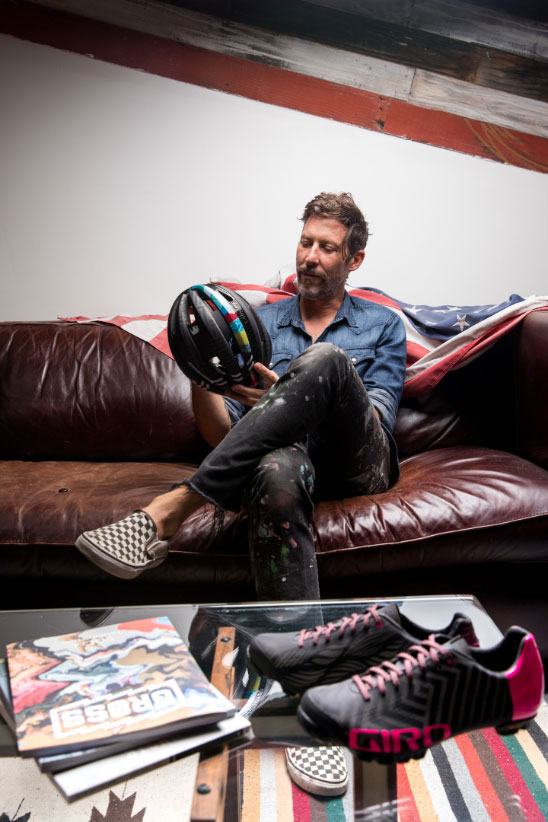 Kille has ridden bikes, surfed, snowboarded and skated his whole life, so naturally action sports have influenced his artwork as well.Today, his art is featured in galleries across L.A. and San Francisco, in private collections, on permanent murals, in coffee shops and breweries, even on the water tanks on the local mountain bike trails here in Santa Cruz.A lot has happened to get Kille to this point. Before he was known for his signature elephant logo and pinwheel pieces—that decorate the walls of the Giro office, and provide us with an inspirational space to work at everyday—he was mountain guiding and shaping surfboards. At one point he was even considering nursing school. 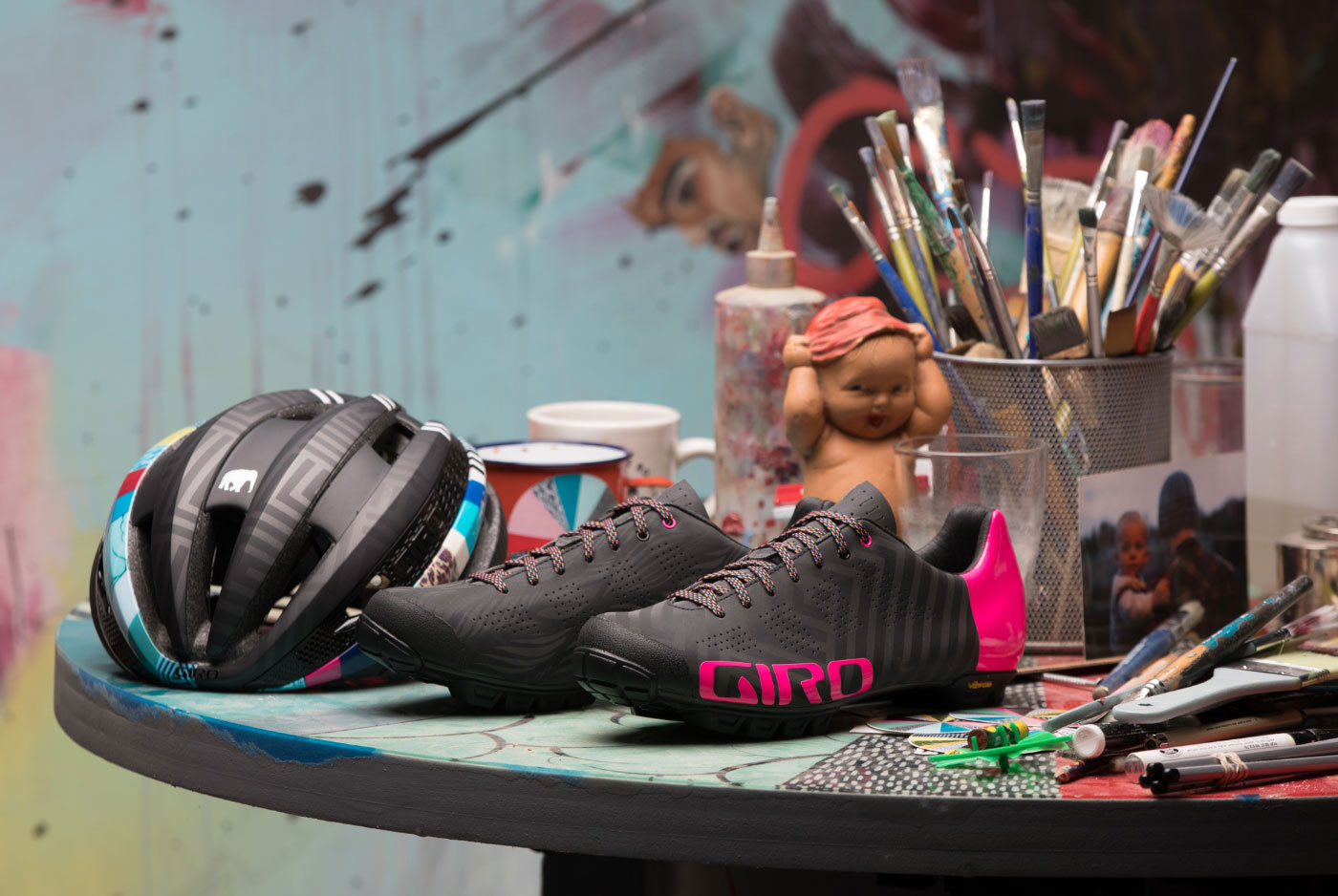 "Growing up I was always pretty creative. I was always dabbling in things and working with my hands, building things... I worked at REI when I was younger with Pat Moroso. I knew he made art on the side as he was working at REI full-time. He had a gallery opening in Sacramento and I was floored by his body of work. He's an incredible artist, and that's what he's doing full-time now. But I think it just opened my eyes. I didn't grow up around art, so I was really impressed, and taken aback by the fact that he did this during his off time."Although Kille drew illustrations here and there in high school and held jobs in pottery and photography in his 20s, Kille didn't pick up a paintbrush seriously until he was 30, and it was when he was shaping surf boards and sponsoring local California surfers."Surfboard building is a lot about form and shape. When I was making surfboards, I had my own team that I was sponsoring and my own surfboard business. That's when I started using paintbrushes. I was doodling and trying it on boards."At this point, Kille was transferring out of Cabrillo College and considering going to nursing school, when his (then) wife suggested he go to art school at the age of 30. Following her advice, Kille started splitting his time between creating boards and going to school at San Jose State. Even at that point he didn't think that art was something he would do career-wise. 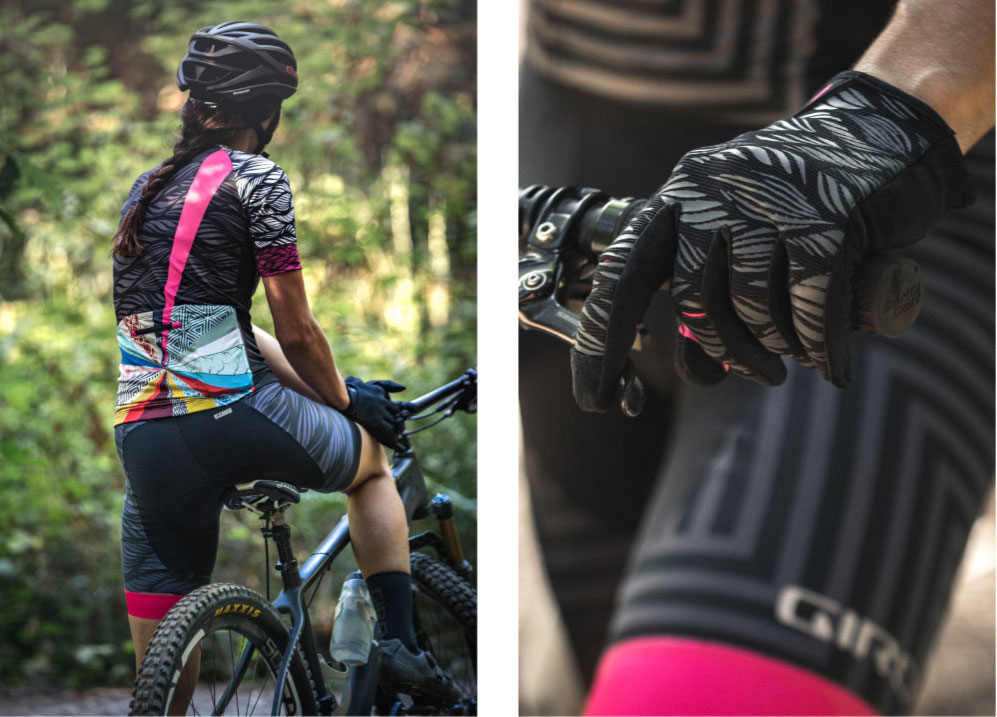 But Kille started painting large and running fast with it—inevitably, running out room in his condo to store his paintings. So, when Verve Coffee Roasters in Santa Cruz opened and offered to hang his pieces, it was a win-win, and people started buying them. The taste of success was brewing for both the coffee shop and for Kille's artwork.

“IN HINDSIGHT THAT WAS A BIG TURNING POINT FOR MY CAREER, MAKING ME QUESTION WHAT I WAS DOING AND WHY.”

Being an artist requires the stomach for the ups and downs that go with it. Just a couple of years ago, Kille hung up his art in a solo show gallery in L.A. and not a single piece sold."In hindsight that was a big turning point for my career, making me question what I was doing and why. I mean, living in Santa Cruz and having two kids is not an easy existence as an artist. But to have a show and not sell anything, it was discouraging. But I really loved what I was doing, so I made a decision. I decided to plug it all in. This is what I wanted to do."Kille took that mentality and applied it to his work and his paintings slowly but surely started to sell. For a while, Kille made a life for himself, working as a stay-at-home dad raising his two kids and as an artist, selling paintings at Verve and in galleries.Some more turbulence hit a few years ago. Kille was going through a divorce, and since his ex-wife was the breadwinner, he had to adapt. 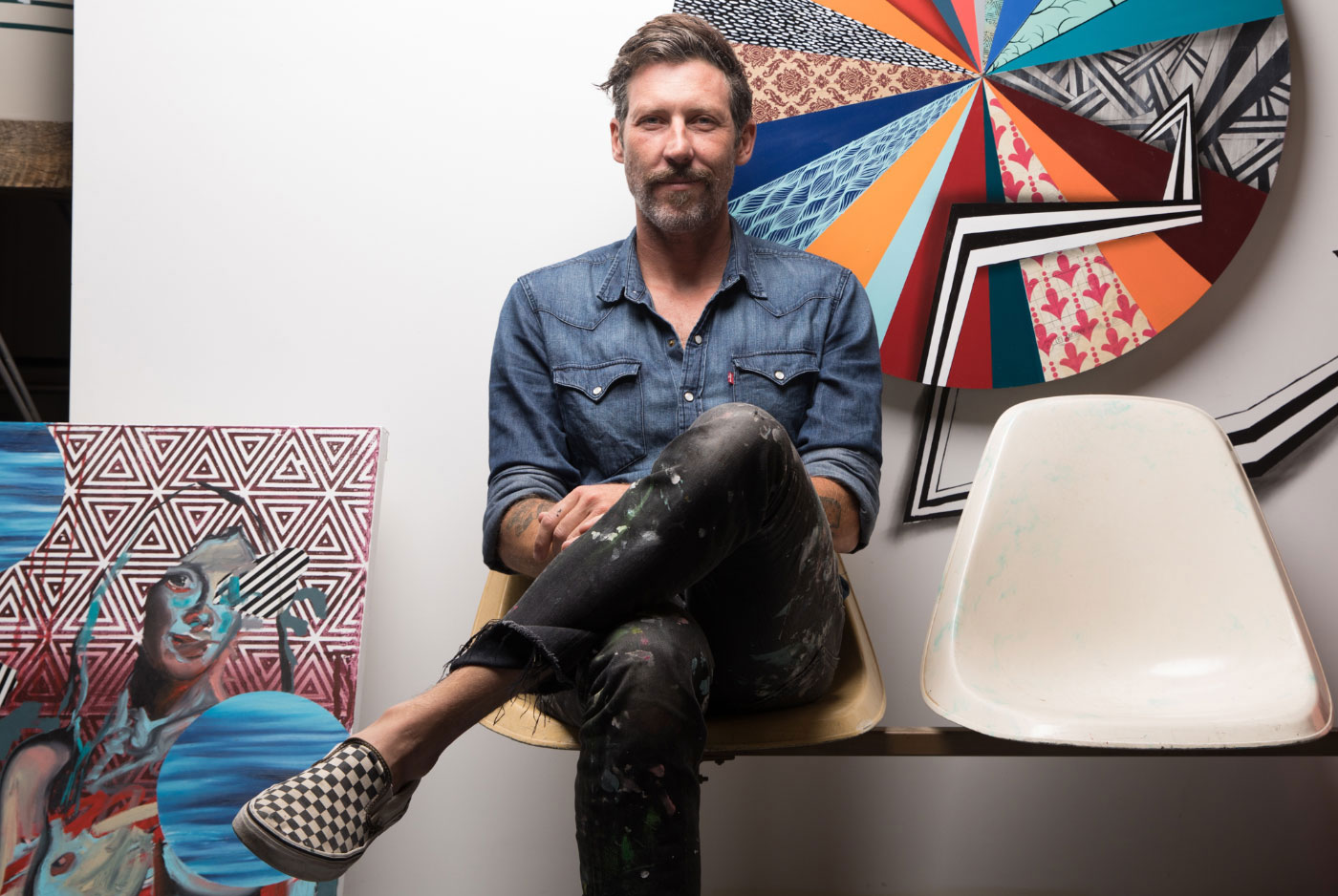 "It was a sink or swim situation. And at this time, I was 38, and I'd been painting for 10 years, I was pretty invested in it. So, it was tricky for a while, I was doing a lot of side jobs, living in my studio... showering in my sink, sometimes at my friends' houses, which in the greater scheme of things is not that bad. But it's not really where I wanted to be."Nearly at the point of breaking, Kille made a choice to give himself one year and really push and go for it. And in that year if he wanted to do something different, he would allow himself to entertain that idea."I mean I don't know what else I would do. I have always created things, whether it's surfboards or throwing mugs on the wheel. I have to have some kind of creative outlet, so this makes sense to me."That year, Kille didn't stop, and his persistence has paid off.

"BEING OUT ON MY BIKE KIND OF CLEARS MY HEAD AND GIVES ME INSPIRATION."

Since then, he's been hired to work on collaborations in the action sports industry, created personal pieces for art collectors, and thrown events while moving his pieces around the different galleries—many times working crazy hours just to get it all done.The last 10 years Kille prevailed, and now, with his home right under his studio, his life and his job are fully integrated."I can't always be on that peak but that contrast of the lows is what makes the highs so great."When Kille isn't mixing paints in his studio in Aptos, he's riding bikes and hanging out with his kids, finding parallels and symbiosis with everything happening around him."Some of the content that I'm creating is driven or influenced by the natural surroundings, being in water or on mountains when on my bike. I think it's all tied together. Being out on my bike kind of clears my head and gives me inspiration... You might ride sections of singletrack and find flow. I think that's something that happens in the studio too where I kind of get lost, lose sense of time." 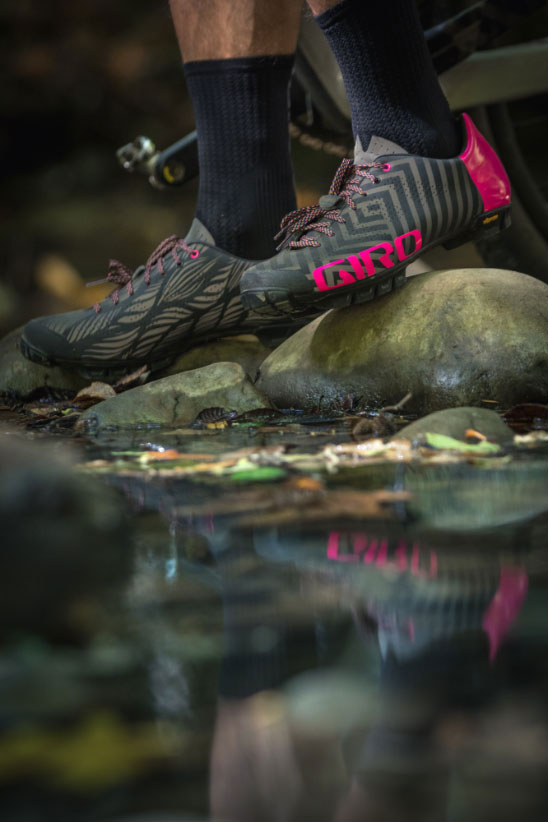 Kille prefers to paint in the moment, letting the paintbrush do what it wants. If it's too mapped out and it's all thought through ahead of time, it feels too contrived, or just boring to him because he already knows what it's going to be."I like allowing the painting to kind of unfold, that keeps me interested."Most recently, we've been lucky enough to work on a collaboration with Kille that features his signature pinwheel art across our Chrono Expert Jersey and Bib, Synthe MIPS helmet, DND Glove, and Empire VR90 shoes."The pinwheels, there's something really simple about them, and maybe it's almost universal. To me I feel like almost anyone anywhere can relate to them… they feel a bit timeless. I want to wake up, drink my coffee while looking at something like that."With the Giro x Jeremiah Kille Collection, we hope to remind riders of the importance of committing to your dreams.Whether you're wearing this kit sipping your coffee before heading out on a ride or cruising to the brewery on a commute home from work, not only do you have a unique product with something organic and surreal to look at, you also have a reminder of who he is and what it means to keep going.